Archive for the category “Hong Kong”

A cover from Hong Kong, sent by postcrosser Yuen for Nice Cover Circuit in postcrossing forum. 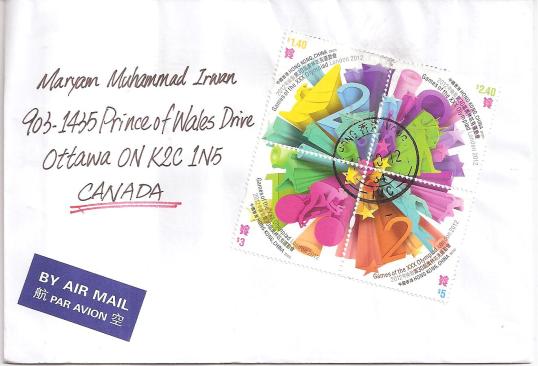 Yuen affixed one set of setenant stamp that consists of four stamps. The setenant stamps set commemorates the Games of the 30th Olympiad London 2012. The postmark date is 10 October 2012. Thank you Yuen for this beautiful setenant stamps!

This is the last postcard that I sent from Hong Kong to my address in Canada. On 4 September 2012, my family and I visited Hong Kong Disneyland. We spent the whole day having lots of fun! As it was a weekday, there were not many people and we did not have to wait at all for most of the rides and shows.

I wrote this postcard for myself and sent it from Town Hall in Disneyland Hong Kong. 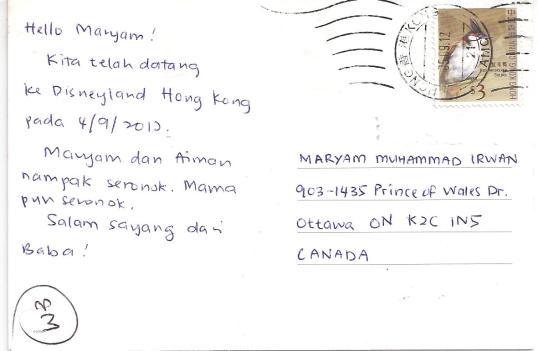 #422 Cover and Postcard from Hong Kong

On 4 September 2012, we left Hong Kong and Kowloon for Disneyland Hong Kong!! We stayed in Hollywood Hotel as it was cheaper compared to Disneyland Hotel. I decided to send a postcard and a cover from the hotel to my address in Canada.

This is the postcard.

This is the back of the postcard. The postmark date is 6 September 2012. 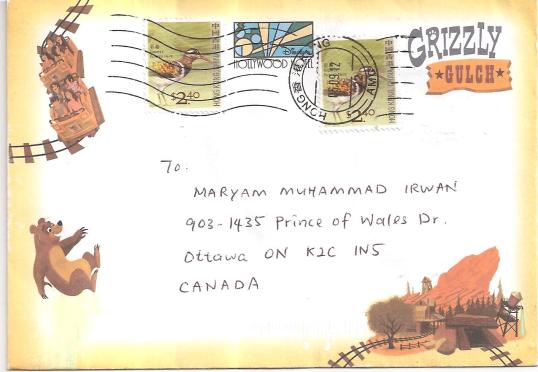 Another postcard that I sent to my address in Canada while I was in Hong Kong. 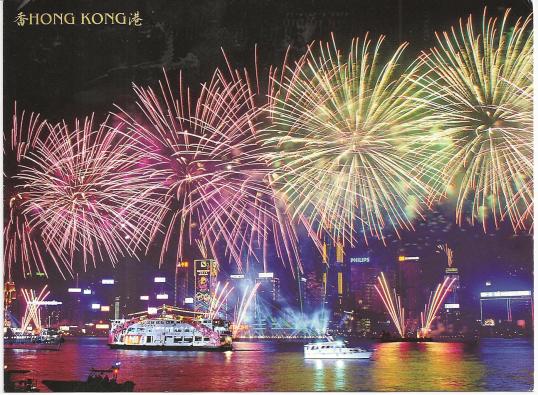 This one shows fireworks over Victoria Harbor.

We arrived in Hong Kong on 2 September 2012 around 1:00 pm with Cathay Pacific. We took the airport express train to Kowloon and then took the free shuttle bus to hotel. At about 6:00 pm in the evening, we went to Victoria Peak using the tram. It’s very similar to the old tram in Penang Hill, Malaysia. We spent the next day at Ocean Park Hong Kong, and returned to hotel around 6:00 pm. That evening, Aiman was having a fever so he stayed at hotel with mom; but I decided to go and try the Star ferry cruise with Maryam! We arrived at Kowloon Pier at 7:45 pm but we missed the 8:00 pm ferry trip! I decided to wait and take the 9:00 pm trip and Maryam agreed. At 8:00 pm, we watched the light and sound show from Kowloon Public Pier. After the show, I bought some postcards while waiting for our 9:00 pm trip.

This postcard shows the Star Ferry Pier at Kowloon Jetty in Tsim Sha Tsui at night.

This is the back of the postcard. The postmark date is 5 September 2012. There were so many people coming out from the 8:00 pm trip, but for the 9:00 pm trip there were less than 10 people!!! So basically Maryam and me got the chance to move and change places as much as we like! The cruise was fantastic. We got complimentary drinks and cakes from a small counter on the upper deck. The benches on the deck are also similar to Penang ferry in Malaysia.

If you read my first post this month, you will know that I was away for a long summer vacation in Malaysia with my family. Earlier this month, on our way back to Canada, we stopped in Hong Kong for transit from 2 September 2012 until 5 September 2012. While we were in Hong Kong, I managed to send some postcards to my address in Canada, and all of them have arrived last week. I shall upload each of them here.

The first postcard is a 3D image postcard of a seahorse. I bought this postcard while we were visiting Ocean Park Hong Kong on 3 September 2012.

The cost of sending a letter from Hong Kong to Canada is HKD 3. The postmark date is 5 September 2012. I sent home only one Ocean Park postcard since the price of this postcard is HKD 50!!

A postcard from Hong Kong sent by postcrosser Jolly for Single View Tag in postcrossing forum.

The postcard shows a view of Hong Kong at night. I received almost a similar postcard before – see my entry #362. 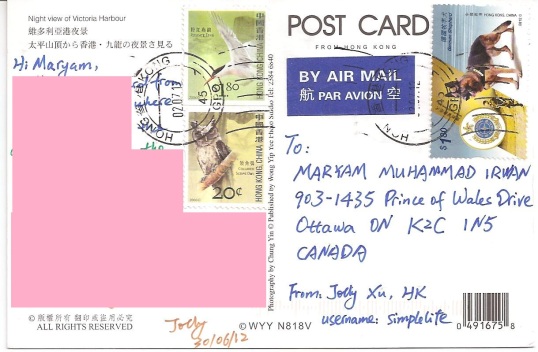 At the back, Jolly affixed three stamps. One of them shows a German shepherd used by the Correctional Services of Hong Kong. The postmark date is 2 July 2012 and the location is Hong Kong GPO. Thank you Jolly!

A postcard from China sent by postcrosser Heather Sun from Beijing for China meets the world tag in postcrossing forum.

The postcard shows a colorful scenery of Hong Kong city at night.

Heather affixed one stamp that depicts an old Chinese painting. The postmark date is 30 June 2012. Thank you Heather!

This is a cover from Germany, sent by Igor Adolph.

This is the souvenir sheet from Hong Kong that was issued to commemorate the Centenary of Xinhai Revolution in 2011. This was a joint issue between China Post, Hong Kong Post and Macau Post. Xinhai Revolution abolished the imperial dynastic rule in China in 2011 and transformed the country into a republic. 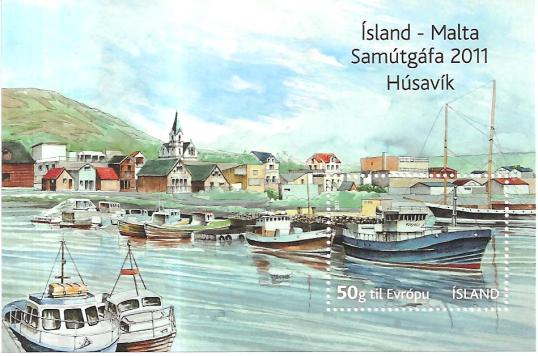 Thank you Igor for all these nice stuffs!

My first cover from Hong Kong! It was sent by Alan Leung from Shatin. This cover is in exchange for a Titanic cover arranged by the Nice Cover Circuit in postcrossing forum.

Alan affixed four stamps – all from the Hong Kong, China – France Joint Issue on Art commemorative stamps set issued on 3 May 2012. The postmark date is 12 May 2012, and the cancel shows a picture of a bridge. Thank you Alan!